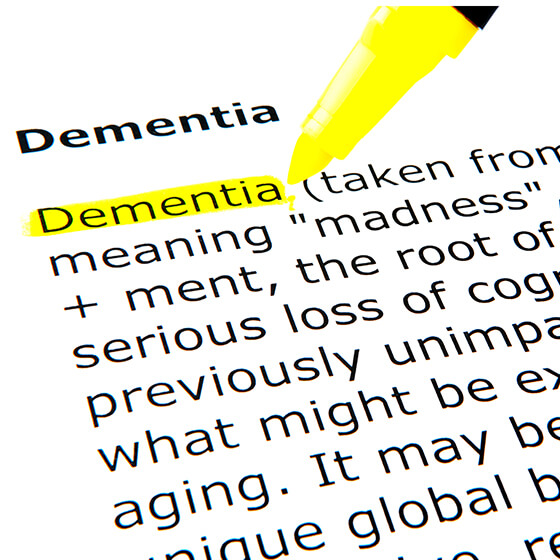 Dementia is often referred to as a disease, however, it is not actually a singular disease, but a degenerative syndrome that will cause the sufferer to withdraw from family and society, have long-term memory loss, and, gradually, lose bodily functions. “Dementia will affect 8 percent of Canadians over the age of 65 years. The risk increases with age, with 35 percent of seniors 85 years and older meeting the criteria for dementia,” says the Canadian Study of Health and Aging Working Group.

The symptoms come on slowly and are usually blamed on the natural process of aging. The symptoms differ slightly for each form of dementia. They can include confusion, aggression, mood swings, compromised cognitive ability, and trouble with verbal and written language. There are several different types of dementia, and we will be discussing each one.

The most common form of the dementia syndrome is Alzheimer’s disease. There are four main stages of the disease; pre-dementia, early, moderate, and advanced. The early symptoms of pre-dementia are often blamed on stress or natural aging. The most noticeable symptom is memory loss, which appears as difficulty in remembering newly learned facts and the inability to learn new information. It only affects the most complex daily activities. The continued loss of memory and learning ability lead to a definitive diagnose in the early stage of Alzheimer’s. It does not impact all memory capacities equally. Older memories and implicit memories, remembering how to do things, are impacted to a lesser degree. Speech may be hindered by a shrinking vocabulary. In the moderate stage, independence is significantly hindered with sufferers unable to perform basic daily activities and routines. During this phase, the person may fail to recognize close relatives. Long-term memory becomes impaired. Wandering, irritability, sundowning, and resistance to caregiving can also appear. In the advanced and final stage of Alzheimer’s, the senior is entirely dependent on caregivers. Aggressiveness can still be present, but apathy and extreme exhaustion are much more common symptoms. Sufferers usually are bedridden, and they lose the capacity to feed themselves.

Multi-infarct dementia is one of the six types of vascular dementia. It is irreversible and is caused by one large stroke followed by smaller ones or a series of small strokes. Early discovery and an accurate diagnosis are important as vascular dementia is partially preventable. Risk factors for multi-infarct dementia include age, hypertension, smoking, hypercholesterolemia, diabetes mellitus, cardiovascular disease, cerebrovascular disease, and prior strokes. Additional strokes must be averted through surgical or medical therapy to lessen the chance of developing this type of dementia.

Binswanger disease is a type of vascular dementia caused by damage to the white brain matter. White matter degeneration can be caused by many conditions including chronic hypertension and old age. This disease is characterized by memory loss, loss of brain function, and by changes in mood. These changes are known to interfere with the main functions of the brain. The first symptoms are typically mental deterioration or stroke.

Frontotemporal lobe dementia is a syndrome caused by degeneration of the frontal lobe of the brain. The damage can also spread to the temporal lobe. It can be divided into three subtypes; behavioral-variant frontotemporal dementia, semantic dementia, and progressive non fluent aphasia. Signs and symptoms can vary considerably between patients. Unlike other forms of dementia this type usually only affects the senior’s behavior, not their memory.

Corticobasal degeneration is a rare, progressive disease involving the basal ganglia and cerebral cortex of the brain. It is characterized by difficulty in movement and cognitive problems. Diagnosis is usually difficult because symptoms are similar to those of other diseases.